Home > Film library > All films > The ABCs of love
Previous Next

The ABCs of love

Looking after a kid who's not your son can be hell. Except when his cute teacher thinks you're his dad.

Thirty-year old adulteen Vincent babysits animals and children for a living, and his latest job is 9-year old Bart, who just moved into the building with his overworked and single mom.

At his new school, Bart is anxious to develop a cool reputation, so when everyone assumes that laid back, eccentric Vincent is his dad, he begs him to play along, especially when his ‚Äúdad‚Äôs‚Äù fun, immature behavior delights all the kids in his class!

Initially reluctant, Vincent changes his mind after falling in love with his ‚Äúson‚Äôs‚Äù attractive young teacher. And in order to spend as much time with her as possible, he does his best to make sense of the mysterious codes and expectations of his weird new tribe: the Parent-Teacher Association.

But Vincent soon faces a bigger issue: How to backtrack on the huge ‚Äútiny little lie‚Äù he‚Äôs gotten himself into.

Femme Actuelle
"A lot of smiles in store!"
"It's fresh, light, colorful, sweet and really funny."

Premi√®re
"Funny, endearing and right with the times"

Ouest France
"School is back, so is love and laughter"

BFM TV
It's funny, cheerful and makes you feel great."

Elle
"A jewel of charm and social commentary"

La Croix
"Incisive dialogue served up by a great cast"

RTBF (Belgium)
"Joyful, fresh and warm-hearted, with just the right touch of impertinence"

Le Soir (Belgian Daily)
"A lovely family comedy"
"Noemie Saglio digs into a unique genre with realism, humor, kindness and a dash of spice: Les parents d‚Äô√©l√®ves"
"A romantic comedy that happily strays off the beaten path. A fun break."

Avenir (Belgian daily)
"Fresh, funny, and right with the times"

Add to
my selection 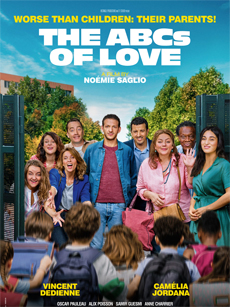